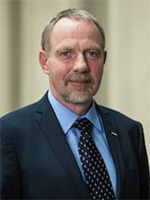 has been Full Professor for Trace Element and Micro Analysis a t ETH Zürich since 2008 . From 2010 until 2012 he was Chair of the Department of Chemistry and Applied Biosciences at ETH Zurich and since 2015 he is Vice President for Research an d Corporate Relations at ETH Zurich . His research program focuses on fundamental and applied s tudies in ICP- MS and LA -ICP-MS, including studies on laser-sample interaction, aerosol transport, and plasma- re lated excitation processes, particle plasma interaction and particle vaporization for single nanoparticle analysis. Fundamental processes of UV -ns and UV-fs laser ablation used with Q-ICP- MS, SF -ICP-MS, TOF-ICP-MS, and MC-ICP-MS as well as alternative excitation sources, such as glow discharg e are currently under investigation.